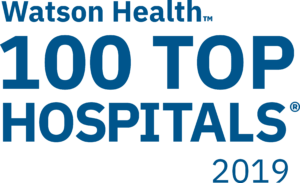 Medicare & Medicaid Services (CMS), St. Clair Hospital today was named one of the nation’s 100 Top Hospitals® for 2019. This marks the second consecutive year and fourth time since 2012 that St. Clair has won this prestigious honor.

The 100 Top Hospitals award is the culmination of an annual study by IBM Watson Health that identifies top performing hospitals in the country based on overall organizational performance. Formerly known as the Truven Health Analytics 100 Top Hospitals, this study spotlights the best-performing hospitals in the U.S. based on a balanced scorecard of publicly available clinical, operational, and patient satisfaction metrics and data. To conduct the 100 Top Hospitals study, IBM Watson Health researchers evaluated short-term, acute care, non-federal U.S. Hospitals. Hospitals do not apply or pay for this honor, and all acute care hospitals in the United States are evaluated for potential inclusion. The study has been conducted annually since 1993.

The 100 Top Hospitals  showed the most significant outperformance versus non-winning peer group hospitals within clinical and operational performance benchmarks evaluated in the study.

“At a time when research shows that the U.S. spends nearly twice as much on health care as other high-income countries, yet has less effective population health outcomes, the 100 Top Hospitals are setting a different example by delivering consistently better care at a lower cost,” said Ekta Punwani, 100 Top Hospitals program leader at IBM Watson Health.

“This prestigious award affirms St. Clair Hospital’s commitment to providing world-class health care to our patients and is a reflection of how dedicated our board, medical staff, employees and volunteers are to serving the community,” said John T. Sullivan, M.D., Senior Vice President and Chief Medical Officer, St. Clair Hospital.

IBM Watson Health noted that if all Medicare patients received the same level of care as those treated at the 100 Top Hospitals:

If the same standards were applied to all in-patients, not just Medicare patients, the impact would be even greater.

Today’s announcement continues a period in which St. Clair Hospital has garnered multiple national recognitions, including:

St. Clair Hospital is a nationally recognized integrated health system with more than 2,500 employees and 600 physicians serving 500,000 residents of southwestern Pennsylvania. In 2016, it became a member of the Mayo Clinic Care Network.  As the region’s largest independent hospital, St. Clair participates with all major insurers.