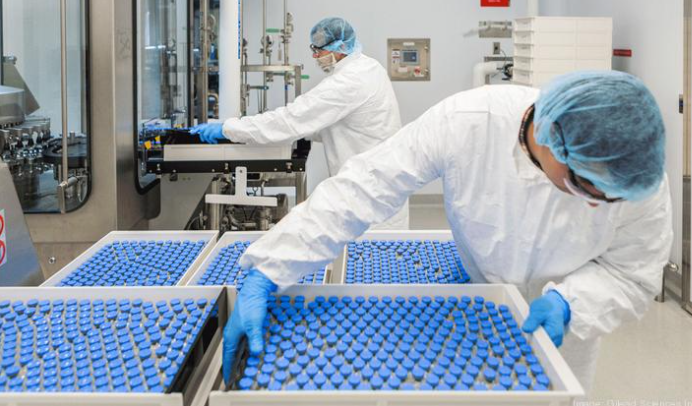 With access to supplies of monoclonal antibodies limited due to short supply, a therapy from earlier in the pandemic has recently gotten the green light to be used in outpatient settings to treat early cases of Covid-19. But health systems are in the early stages of being able to set up the treatment.

Remdesivir, which is under the brand name of Gilead Science’s Veklury — was approved this week by the U.S. Food and Drug Administration with its emergency use authorization to be used in the outpatient setting for patients who have early, mild symptoms but are at risk of hospitalization or death. It had previously only been used in the hospital, and before that it had been designed to treat hepatitis C.

That’s potentially good news for patients, and there have been many in the past few weeks, who haven’t been able to get monoclonal antibody treatment because two of the three medications don’t work against the omicron variant that has overtaken delta in prominence in the region over the past month. The third, sotrovimab, is effective but there isn’t a lot of it available.

“Three days of it very, very early can prevent you from going to the hospital, but you need three infusions in a row, which is logistically very hard to do,” said J. Ryan Bariola, an infectious disease physician and co lead of the Covid-19 therapeutics committee.

How logistically difficult? Instead of a single hourlong infusion and then an hour of observation, three separate days of infusions needs to be set up for each patient for the remdesivir infusion to be effective. It has to happen in a certain time period, early in the process.

With sotrovimab, there’s the infrastructure and process set up at hospitals and infusion centers around the Pittsburgh region but not enough to meet the need because of so many people ill with Covid-19 who would qualify. It’s the other way around with remdesivir. There’s plenty of supply of the medication. But the challenging thing is getting patients in three days in a row, given their disease progression and staffing and when those three days would fall in a week.

“The patients don’t mind coming in three days, but on the institutional side, it’s logistically more involved with staffing (and other issues),” Michael said.

St. Clair Health is in the midst of trying to figure out how to work out the challenges so that it’s able to provide it. It’s in the planning process to make sure there’s enough staffing and how to provide the remdesivir during those three days.

“The pinch point is the infusion centers in the area having a protocol for it and having the infrastructure from a staffing standpoint,” Michael said.

UPMC spokeswoman Allison Hydzik said its sotrovimab supply is meeting the needs of its eligible patients so it’s not yet administering remdesivir to outpatients.

“But we are prepared to offer it if the situation with sotrovimab changes, in which case we’ll administer it primarily through the system of infusion centers we’ve been using for monoclonal antibodies,” she said.

“There are a lot of logistical barriers,” Walsh said.