Not Just the Flu, but a Ticking Time Bomb

It was the height of flu season when a middle-aged gentleman appeared in an exam room at St. Clair Hospital. He wasn’t in acute distress, but he complained of cough, muscle aches, headache, nausea and fatigue. Plus, he was a little dehydrated.

On paper, it sounded like the flu. But Jason M. Biggs, M.D., Chair of Emergency Medicine at St. Clair Hospital, wasn’t convinced it was the flu. To his expert eyes, something was off, though he couldn’t pinpoint quite what it was. 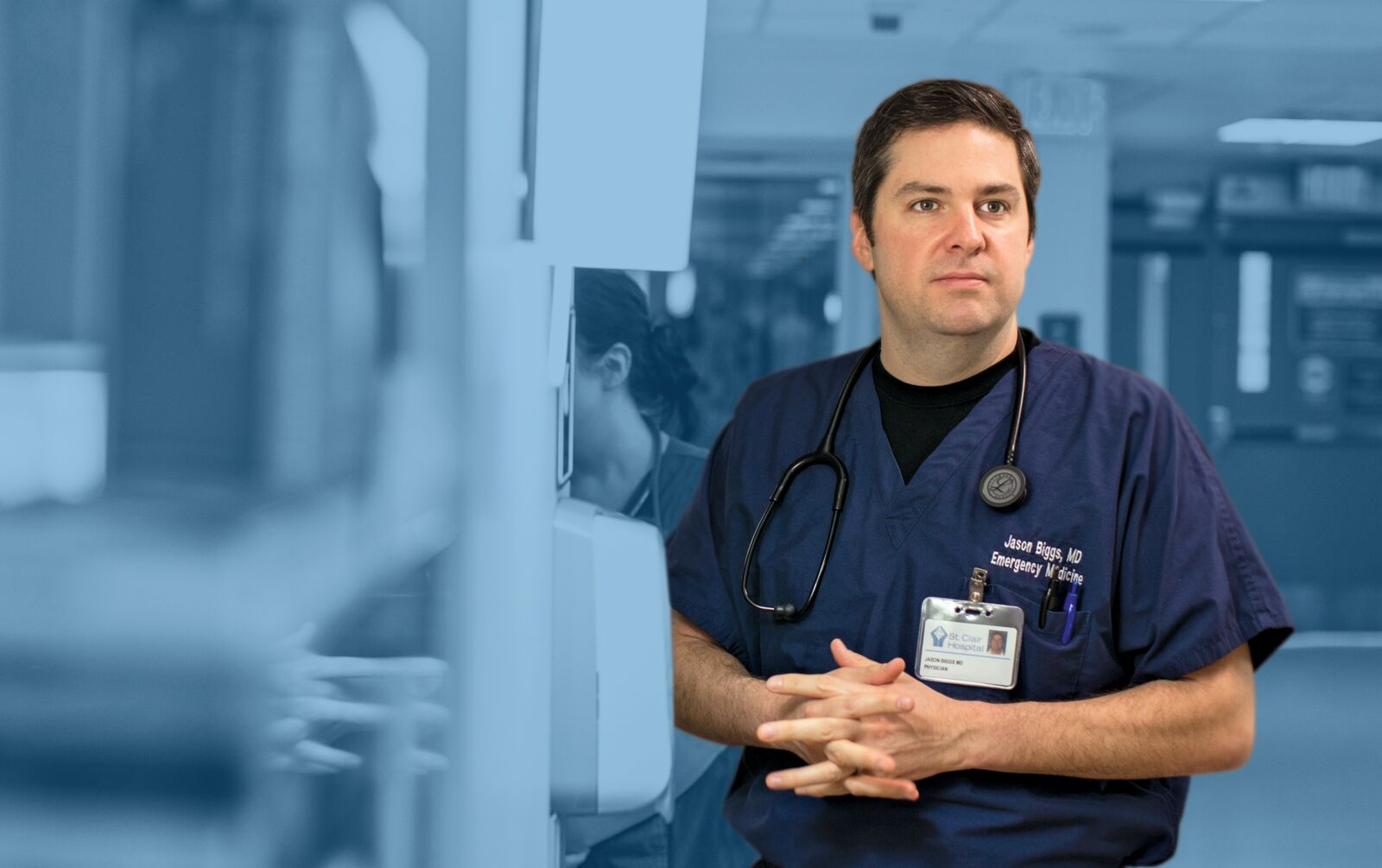 Trusting his instincts, he did a re-approach with the patient. He went back to the beginning of the problem to see if he’d missed anything. “I was in my kitchen,” the patient told him, “and all of a sudden I had a headache, and then nausea …”

There it was, the clue Dr. Biggs had been looking for. The word “sudden” hadn’t been used the first time around, and it was a major red flag. The man’s problem, Dr. Biggs realized, was probably not a simple case of the flu.

He ordered a CT scan to look for a cause of the headache. Normal. He performed a lumbar puncture (spinal tap) to examine and test the cerebrospinal fluid (CSF). The CSF was discolored, and testing revealed that there were blood cells in the CSF that did not belong there. Another CT scan was ordered, this time with contrast (dye) so that blood flow could be visualized.

The testing revealed a cerebral aneurysm with sentinel bleeding, essentially a ticking time bomb in the patient’s brain. That meant a weakened blood vessel was ballooning, threatening to leak or rupture. Either one of those outcomes could have killed the patient or caused a hemorrhagic stroke — which could lead to major, lifelong health complications.

The key symptom of a cerebral aneurysm? A sudden, severe headache, often with nausea and vomiting.

Dr. Biggs explained the finding to the patient and his wife, and then immediately referred him to a neurosurgeon. The patient underwent endovascular coiling, a procedure that involves threading a thin, flexible, spiral wire through a micro-catheter into the aneurysm, where it forms a coil that creates blood clots. The clots prevent blood from flowing to the cerebral aneurysm, closing it off. This decision helped the patient avoid invasive surgery that would have required removing part of the skull.

A year later, Dr. Biggs happened to run into the patient and was pleased to see he had made a nearly full recovery, with minimal residual deficits. It was an ideal outcome, which could have been drastically different, even tragic. It was all the result of the insight and persistence of a St. Clair ER physician who acted at the highest level of expertise and with confidence in that expertise. At that level, clinical medicine becomes the art of medicine.

This story is an edited version of a full report published in our Spring 2017 edition of HouseCall. If you want to read the full write-up — which includes more information — you can visit the St.Clair website and download a copy of our Spring 2017 HouseCall here.