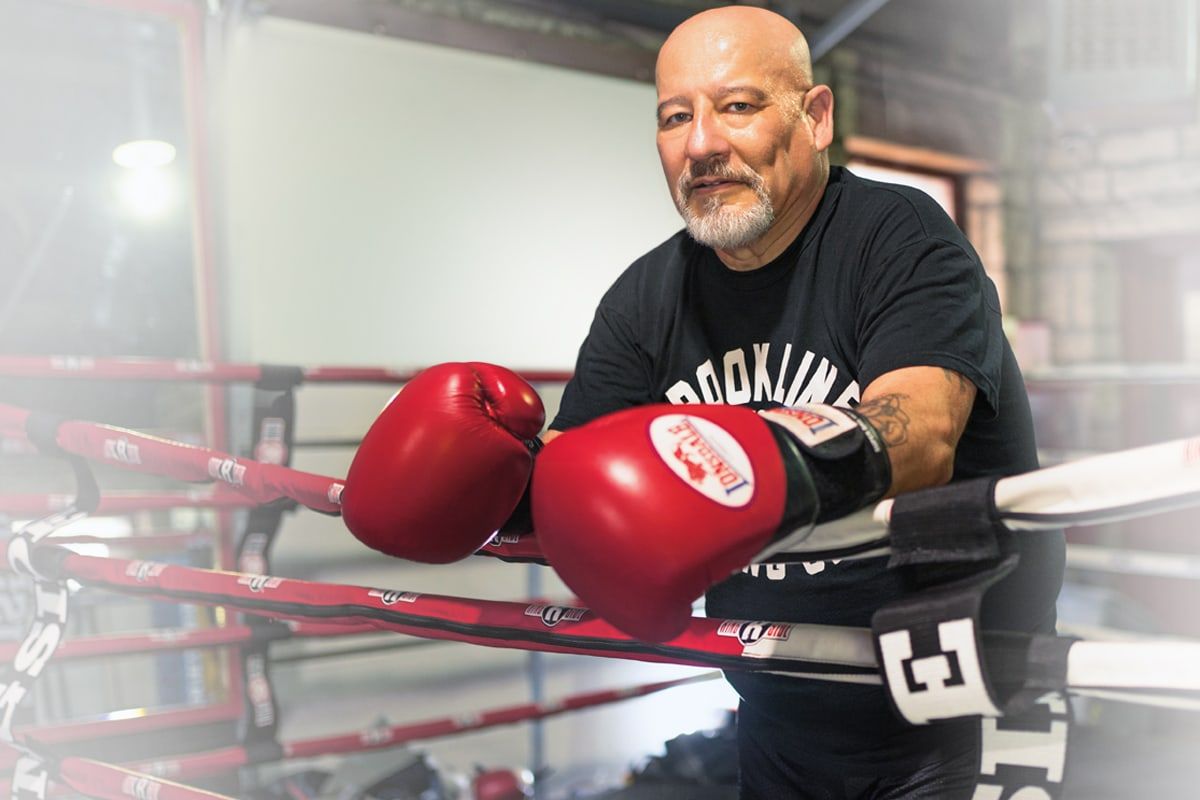 Michael Bayens: The fight of his life

Michael “Mike” Bayens has sparred with Roberto Duran and Sugar Ray Leonard, and he will never forget the power and speed that these two formidable athletes possessed. Bayens, of Dormont, is a former amateur boxer who fought in the Golden Gloves in 2002 and once won a match in 32 seconds. He is also a boxing coach for the Pittsburgh Boxing Club, the founder of the Brookline Boxing Club, and well known among local boxing fans. He loves boxing, has expert knowledge of it, and possesses a rather surprising view of it. “Boxing is an art form — it’s the purest form of the martial arts. It’s actually human chess at its finest. It isn’t just about throwing punches; it’s a problem-solving sport and a thinking man’s game, just as chess is. In boxing and in chess, you have to study your opponent and calculate every move. It’s one-on-one competition.”

With his boxing chops, plus his 20 years in the U.S. Marine Corps, Bayens is one tough guy who is ready to take on any opponent. “I’m a fighter. I’ve always had an instinct to fight. I still go to the gym to hit the punching bag.”

But a recent opponent took Mike by surprise and had him up against the ropes for a while. That opponent was a microscopic but very aggressive fighter by the name of COVID-19, also known as the novel coronavirus. “COVID-19 wants to knock you out,” Bayens says. “It took the wind out of me. Before COVID, I thought I was invincible.”

Bayens, 65, is a retired mail carrier for the United States Postal Service who had a mail route in North Versailles for years. He liked his work and all that daily walking helped keep him healthy. He goes to the gym, jumps rope and has continued to be a regular walker. He and his wife Virginia “Ginger” were aware of the COVID-19 pandemic and conscientiously followed the recommended precautions. “I knew that the virus was out there and was very contagious but I didn’t think it would ever affect me,” he says. “I have no underlying conditions and I didn’t know anyone who had it. I’m the first person I know who got the virus.”

Bayens’ illness began with vague symptoms: loss of appetite, fatigue and restlessness. He had no fever or shortness of breath. But his wife worried that it could be COVID-19 and urged him to see their primary care physician. On Monday morning, July 6, she drove her husband to the office of Bora Janicijevic, M.D., who immediately called for an ambulance to take Bayens to St. Clair Hospital’s Emergency Room. He was transported to the Intensive Care Unit and remained there for the next eight days.

In the ER, Mike had stable vital signs and was alert, but he required five liters of oxygen to keep his oxygen saturation at normal levels. His chest x-ray showed diffuse pneumonia in both lungs, and bloodwork indicated that he was already in moderate kidney failure and had an inflamed liver. “Mike had been self- isolating at home, and had no contact with anyone known to have COVID-19,” explains Gregory J. Fino, M.D., Chief of Critical Care Medicine at St. Clair. “His symptoms were mild, but he was much sicker than he appeared.”

Bayens was admitted to the ICU where, overnight, his condition deteriorated, with his oxygen requirement increasing to 15 liters. The intensivist physicians of the ICU, led by Dr. Fino, knew that Bayens needed mechanical ventilation at that point. They sedated him and intubated him, placing a breathing tube into his airway, and connected it to a ventilator. 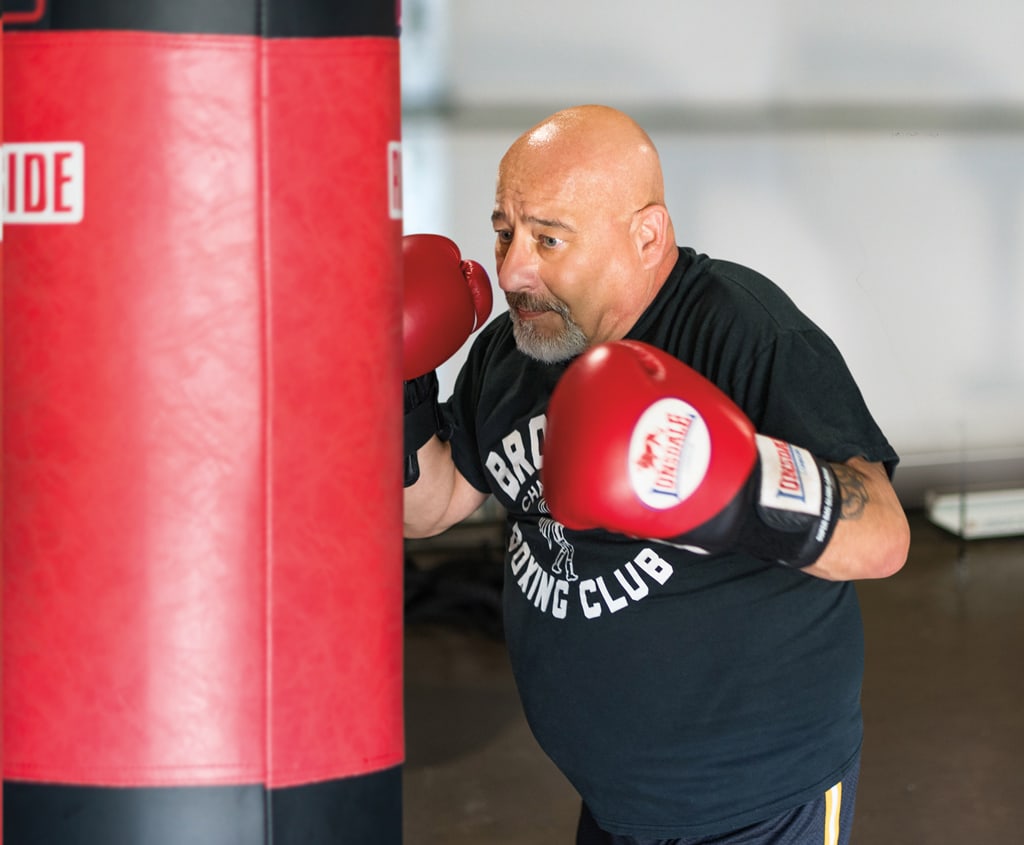 This was taking place in early July, at a time when intensivists, pulmonologists and infectious disease specialists across the country were eagerly trying various therapies and sharing their experiences as they worked with fierce determination to save lives being threatened by COVID-19. Dr. Fino and his St. Clair colleagues, including critical care medicine physicians Maxim Valeryerich Bocharov, M.D. and Kevin P. Kane, M.D., infectious disease physician Amanda M. Michael, D.O., and hospitalists Christopher S. Mizzi, D.O., Chad M. Liber, M.D. and Christopher P. Lang, D.O., treated Bayens with a “triple therapy” approach based on what was emerging in the medical literature. This consisted of:

And in This Corner: Ginger

Bayens and his wife have known each other since 1969. Their parents were close friends and they grew up together. “Ginger is my world,” Bayens says. “I’m blessed to have her for my wife.” The couple raised a family of five (Katie, Teddy, Danny, Sean, Paul) and are now grandparents to six. Mrs. Bayens was recovering from surgery and had not yet returned to her job at Target when Mike became ill.

“Mike is never sick. But he didn’t feel well as July 4th approached, and we cancelled our traditional family cookout for that weekend,” she recalls. “That was the first sign; he was very tired and had no appetite. He looked completely worn out and began to have trouble staying awake.

That scared me. When we went to Dr. Janicijevic, I had to stay in the car while Mike saw the doctor. They came out to the car to talk to me, to explain that Mike needed to go to the ER. They said I could not drive him there because he was so sick, that he would probably pass out in the car. His oxygen saturation rate was below 70.”

She watched as the EMTs brought Mike to the ambulance. He had an oxygen mask over his face and tried to speak to his wife, but she could not understand him. One of the EMTs told her, “It’s COVID-19. You need to go home and wait because the Hospital won’t let you come in. They’ll call you later.”

Bayens called his wife on his cell phone from the ER and confirmed that the doctors said it was COVID-19. That, she recalls, was their last conversation until July 14, when he could use a phone again. “It was the longest we have ever gone without talking. If one of us was away from home, we would talk every night.”

None of the other members of the Bayens family contracted COVID-19, but Mrs. Bayens says every one of them was deeply affected by his illness. “It was hard on the kids. We have a granddaughter with special needs; she’s Katie’s daughter and has lung disease. My daughter takes great care of her and knows all about lungs — that was a blessing because she knew what questions to ask and she could interpret the medical information for the rest of us. We created a family system with texting to keep everyone informed. The kids have never experienced one of us being so sick. They could not see their Dad or me, because I was in a 14-day quarantine. In my isolation, I became depressed. Paul, my youngest, would stand on the porch to see me through the window. All the kids stepped up and I’m proud of them. I couldn’t see them, but I could feel the love they were sending to me and Mike.” 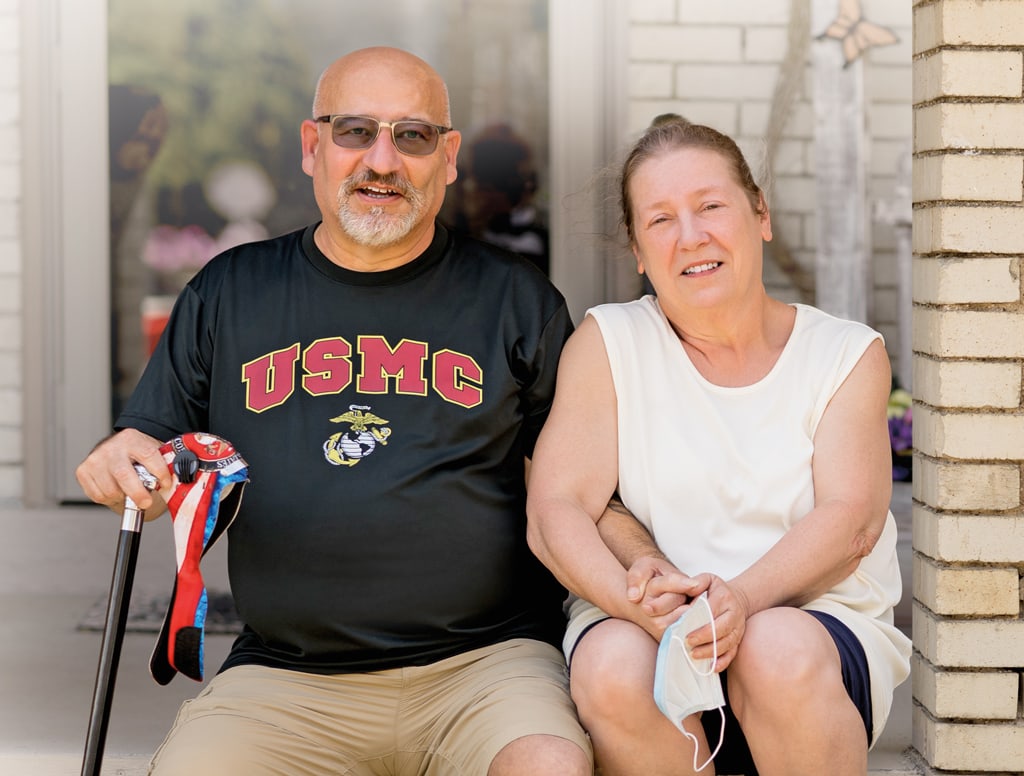 Mrs. Bayens is forthcoming about the depression she experienced. “I encourage people to get counseling if you have a loved one with COVID-19, because this feels like grief. It is as if you have lost the person who has COVID-19 and you start the grieving process, but you still want to hope. There’s nothing to hold on to — you can’t talk to them or see them, to see for yourself how they are. You can’t comfort them. It’s hard to be sitting at home, waiting and wondering. It leaves you feeling paranoid — what next? What if I get it? I tested negative, but I’m susceptible. What if Mike gets it again? Even to go to the store was dangerous.

“What helped me cope with seeing my husband so gravely ill? The nurses at St. Clair. They were wonderful; they talked to us every day and gave Mike my messages. They posted get well cards that the grandchildren made. Mike is doing better. His voice is stronger. We go for walks where it’s flat. He walks with a slow pace, but he is walking and he can drive again.”

Dr. Fino attributes Bayens’ recovery to three main factors: the combination of medications; the fact that he was ventilated quickly; and the quality of the care he received from nursing and respiratory therapy professionals. “These nurses and therapists spend a lot of time with their patients and are very dedicated. Mike received care of the highest quality.”

Bayens spent a total of 15 days at St. Clair. By the time he was discharged to home on July 20, he was breathing room air again. “At the time of transfer to the COVID-19 unit, Mike was weak, but was no longer very sick,” Dr. Fino says. “His only complaint is leg weakness and numbness, but he is walking and gaining strength.”

Bayens believes that his fighting spirit helped him defeat COVID-19. “The nurses told me I was fighting even while I was sedated. I’m still fighting it.”

The Heart of a Fighter

In the 1940s and ’50s, Pittsburgh became a world boxing mecca: five recognized world boxing champions at one time were from Pittsburgh. They inspired Bayens, who says boxing taught him important life lessons about endurance and adaptation to the unexpected. He passed those lessons on to the young men he trained, and now watches with pride as those boxers train others. It’s his legacy. “I still get requests to come to the gym to help out with special boxers, and I enjoy being involved. But now, as a COVID-19 survivor, I want to be involved in helping to end this pandemic. I hope to donate my plasma to help treat others and to spread the message that this virus needs to be taken very seriously. I wouldn’t want this experience for anyone. Wear the mask, and wear it right — why bother if it’s not covering your nose and mouth completely? We all have to follow the experts and look out for each other.” 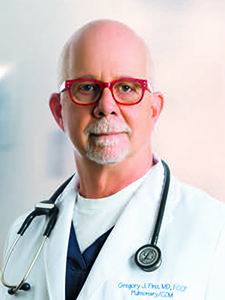 Dr. Fino is Chief of Critical Care Medicine at St. Clair Hospital. He earned his medical degree at the University of Pittsburgh School of Medicine, where he also completed a residency and fellowship. Dr. Fino is board-certified by the American Board of Internal Medicine, including in pulmonary disease. He practices with St. Clair Medical Services.