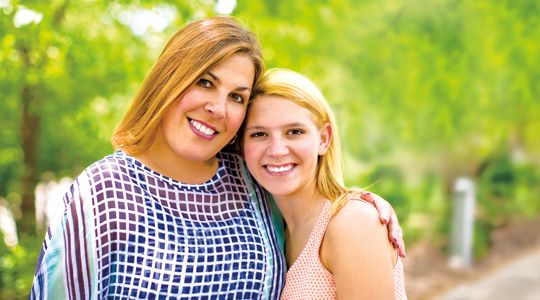 Mother’s Day 2017 was a perfect spring day, bright with sunshine, blue skies, and vibrantly hued flowers among new green foliage. But the color pink was the order of the day in Schenley Park, and it was everywhere as thousands of people gathered for the annual Susan G. Komen Race for the Cure. Among them, for the first time, was Kathy Rumski, 48. Mother’s Day has always been special for this Crafton mother of three, and she had been planning to spend it in a perfect way, with her children Courtney, 24; Megan, 19; and William, 16; and her own mother. Instead, she broke with that tradition and went to the race, and found solidarity and inspiration there.

Traditions matter to Kathy, who works as an Above the Wing ground operations supervisor for Southwest Airlines at Pittsburgh International Airport. Every year, she and her friend Susan schedule their mammograms together, and afterward go out to lunch. This year, their plans changed when the doctor told her, post-mammogram, “We need to do a biopsy.”

Those are always frightening words, and they hit Kathy hard. Her sister, Debbie, who  lives in Houston, has Stage 4 breast cancer. Debbie has had a double mastectomy and reconstruction, and is currently on a course of chemotherapy. “My sister is my hero,” Kathy says. “She has high spirits no matter what, and she always makes me feel better. But I was scared.”

Kathy had the biopsy on December 6, and on December 9 learned that she had breast cancer. She was referred to St. Clair breast surgeon Tara L. Grahovac, M.D., for treatment. “Kathy had ductal carcinoma in situ, which does not have the ability to spread outside the breast tissue,” explains Dr. Grahovac. “However when we did a lumpectomy, the pathology showed invasive triple negative breast cancer, which can spread. Often we add chemo to the treatment plan for that, but she had a small focus of invasive cancer and her axillary lymph node biopsies were negative. This was a rare case where we could skip chemotherapy; she was referred directly for radiation therapy.” 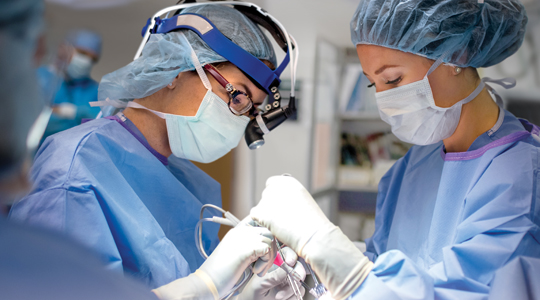 As she prepared for radiation therapy, a CT scan unexpectedly revealed a lymph node underneath the sternum, near her heart, that appeared abnormally large. “It would be unusual for such a tiny cancer to spread that way, and we don’t usually remove lymph nodes in that area, so close to the heart, but if the node was found to contain breast cancer it might change our decision regarding chemotherapy. It was a complicated case, without clear guidelines to guide decision-making, so I decided to consult Mayo Clinic for an eConsult with breast surgeon David R. Farley, M.D., to see if they had encountered a similar scenario,” says Dr. Grahovac. “Ultimately, we made the decision to remove the lymph node, in part because Kathy had concerns, as she has a sister living with breast cancer. The biopsy on that lymph node was fortunately negative.”

“I was happy with the availability of a Mayo Clinic eConsult,” says Dr. Grahovac. “There was a quick turn-around. I have found that patients appreciate evidence-based medicine; they are often well informed and they use the Internet a lot. There are no perfect answers, but having
access to Mayo Clinic is such a benefit because it is a great resource and it’s important to speak with other physicians who are treating this disease; a Mayo Clinic consult is a meeting of the minds. It helps us to customize care to each individual patient. Gone are the days when ‘everyone with this condition gets that treatment.’ When you take each patient as an individual, using your training and the literature plus your personal knowledge of the patient, you get better outcomes and higher patient satisfaction.”

Kathy is a satisfied patient. She finished four weeks of radiation in April and will have a mammogram in July. She appreciates that Dr. Grahovac consulted with Mayo Clinic and also with Dr. Grahovac’s colleague and fellow breast surgeon, Raye J. Budway, M.D.  Kathy had complete confidence in her care. “I was fortunate that I was referred to Dr. Grahovac; she and her Physician Assistant Alexis Joseph, PA-C, have been phenomenal. They treat you with the utmost kindness and respect.”

Kathy honors those who have surrounded her with care and support as heroes: her doctors, her children, her sister Debbie, her mother and her friends. But she is truly the hero of her own life. Kathy is a survivor, and on Mother’s Day she joined other breast cancer survivors at the Race for the Cure. She was surprised by a gift from her daughter, Megan, 19, who had secretly assembled a team for her. “At the event, there is an area that is only for survivors. You walk in there alone. Then you stand with the other survivors, and they have music and speeches. I saw thousands of people looking at me, cheering for me, and I cried when I spotted my team out there. It was very emotional. The whole day was an incredible gift, and I plan to make it a tradition.”