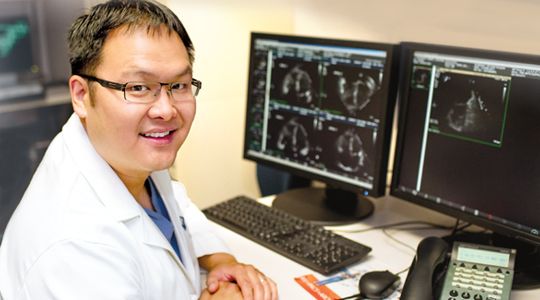 John (a pseudonym, as he requested anonymity) is a South Hills resident who lives an active, fulfilling life, balancing the demands of his profession with family time. He works full time and has enjoyed vibrant health throughout his life. That changed recently, though, when the findings of a routine annual physical examination by his primary care physician propelled him on a long, labyrinthine journey through cancer and its complications. His problems were complex, and his treatment was arduous, but he and his physicians drew upon many excellent resources and specialists in the Pittsburgh area, including those at St. Clair Hospital and Mayo Clinic, thanks to St. Clair’s membership in the Mayo Clinic Care Network. After multiple surgeries and treatments, John is feeling fine and fortunate, and he is back at work.

John’s journey began when an ultrasound ordered by his PCP showed spots on his liver. A biopsy of the liver revealed carcinoid, a rare form of cancer, which had originated in the small intestine. With the diagnosis established, John was ready for the next steps: interventional radiology procedures to shrink the liver cancer, followed by surgery to remove the primary tumor. “My PCP coordinated all of this,” John says. “I call him the quarterback. My wife and I could not have done this without him.”

John says during surgery his heart rate accelerated and became erratic. Told it was atrial flutter, John was referred to Jeffrey C. Liu, M.D., a specialist in cardiac electrophysiology at St. Clair. “Dr. Liu performed an ablation procedure, which took care of the atrial flutter very effectively.” But there were other cardiac-related complications. According to Dr. Liu, a carcinoid tumor secretes serotonin, which affects the tricuspid heart valve. “The valve becomes thickened and leaks, causing blood to back up and the heart to enlarge,” says Dr. Liu. “It’s called tricuspid insufficiency. The valve needs to be replaced eventually, sooner rather than later. We requested an eConsult with Mayo Clinic, which is well known for its expertise in valvular heart disease. Mayo Clinic cardiologist Vuyisile T. Nkomo, M.D., MPH, a subspecialist in structural heart diagnosis, agreed with our findings.”

John says he and his wife were eager to take advantage of the opportunity to consult with physicians at Mayo Clinic. “We initiated the consult because we assumed that Mayo Clinic had probably seen a lot more cases of impact on the heart from a rare cancer like this,” he recalls. “I did not seek the consult because of any lack of confidence in my own local doctors. I was completely satisfied with the quality of their care. The Mayo Clinic consult was a comfort. Physicians there confirmed the impact of the carcinoid cancer and the recommended treatment for my heart condition. I had the chance to see the written consult and I was impressed by how thorough the consult was. It was not a quick look, but an in-depth consult. In my opinion, it was comparable to the advice I would have received had I gone to Mayo Clinic in Minnesota.”

Although John’s journey is not over yet, as he still has the valve replacement surgery down the road, he is feeling relieved and confident. “My case is very rare and complex. I am very pleased with the care I received and the skill of my doctors in Pittsburgh, all of which was borne out by the confirmation we received from Mayo Clinic.”