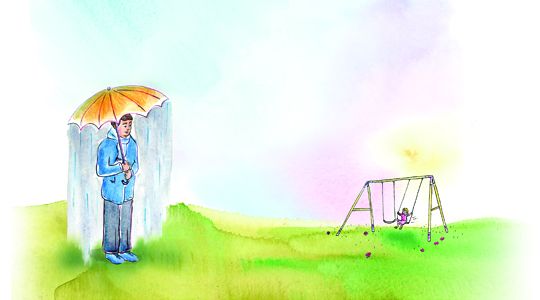 With a loving wife and adorable daughter, getting out of bed in the morning was once a joyful task for John. Then he began to fall into a deep and dark depression, and his morning routine became increasingly difficult. That was when his wife suggested going to St. Clair Hospital.

“On the first day, I did not participate in the IOP group. I was still feeling negative about it,” John recalled. “The group consisted of local people, people like me,” he said. There were teachers, lawyers, college students, doctors, and pilots.”

An In-Depth Look at Depression
John attended the group meetings three times per week and had assignments to complete on his own. He also went through several training sessions and cognitive behavioral therapy.

“We were taught all about depression and mental illness,” John said. “We learned about our biochemistry and the mind-body connection. Depression is a complex disease, and unfortunately, most people don’t understand that.”

As time went on, he started to take notice of the main topic of discussion in the group: the stigma surrounding mental illness. “Everyone was worried about it,” John said. “The thought of returning to work was stressful; if you had been off because of cancer or for surgery, no one would expect a quick rebound. I hope I can help someone by telling my story.”

Moving Forward
After completing the program, John continued to take his medication and see a therapist on a regular basis. He returned to work and started looking forward to mornings with his family again. He attributed his success to the wonderful IOP staff at St. Clair Hospital.

“I felt cared for on a personal level,” he said of his experience. “They are excellent listeners and remember what you have said before. I was treated as an individual, and I was encouraged to be my own advocate.”

This story is an edited version of a full report published in our Winter 2018 edition of HouseCall. If you want to read the full write-up — which includes more information — you can visit the St.Clair website and download a copy of our Winter 2018 HouseCall here.