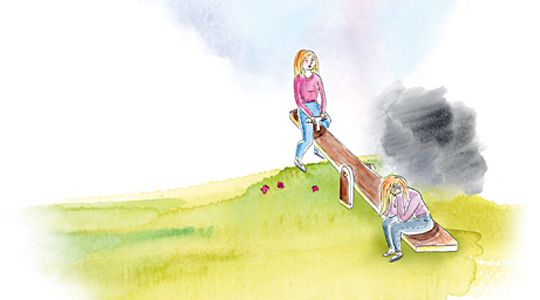 Countless Hollywood productions have depicted Electroconvulsive Therapy, or ECT, as a dangerous procedure. These inaccurate depictions have worked to build a culture of fear around what used to be called “shock treatments.” In reality, ECT has come a long way since it was introduced in the 1930s.

St. Clair Hospital’s own Dr. Kenneth von der Porten, M.D., Ph.D argues that ECT is one of the best forms of treatment for depression, especially for patients who are resistant to medication. ECT induces a brief, controlled seizure. It can be used to treat Parkinson’s Disease, psychosis, depression, and more. ECT can also be used to break up status epilepticus, a dangerous type of prolonged seizure.

Jane began receiving ECT treatments for her bipolar depression at St. Clair Hospital after a recommendation from her psychiatrist, Bruce A. Wright, M.D. He recommended ECT because bipolar depression is much harder to treat because patients experience episodes of mania.

Jane admitted she was skeptical at first. “It was a hard decision, and I was initially scared,” she recalled. “My husband is very supportive, and he encouraged me to try it. Over the years, the procedure has changed, and it’s easier now. It was a much bigger deal 20 years ago; now it’s routine.”

At the time of ECT’s inception, there were no effective psychotropic medications, and it eventually fell out of favor when Thorazine was introduced in the 1950s and 60s. Since then, it’s been modified dramatically to provide maximum benefits with minimal side effects.

At St. Clair Hospital, doctors will determine beforehand whether each individual patient will benefit from the procedure and assess any additional medical risks. Patients will have an opportunity to watch a short video about ECT, as well as speak with past patients in the Outpatient Surgery Department.

Conducted in the Post Anesthesia Care Unit, or the PACU, an intravenous line is inserted and electrodes are placed on the scalp to transfer the electric current. Vital sign monitors are applied, and the patient receives general anesthesia and a muscle relaxant.

Throughout the entire procedure, an Electroencephalogram (EEC) records and monitors the induced seizure, which the patient cannot feel. It lasts anywhere between 20-60 seconds. Following the procedure, the patient is transferred to the Recovery Room where they will wake approximately 5-10 minutes later.

Jane continues to receive ECT treatments on a monthly basis and is now an advocate for those considering it. “If your doctor recommends ECT, you should definitely give it a try, especially if your meds aren’t working well,” she said.

Side effects can include grogginess, mild muscle pain, and headache. Of her experiences, Jane said, “I get a slight headache and I’m sleepy for a while after treatment, but that’s all.” She also experienced slight memory loss at first, but her doctors were able to adjust her treatments and that issue was quickly resolved.

“Mental illness is just another illness–you manage it like any chronic illness,” Jane said. “St. Clair has given me many resources to do that; the whole program is well thought out. For me, St. Clair has been wonderful.”

This story is an edited version of a full report published in our Winter 2018 edition of HouseCall. If you want to read the full write-up — which includes more information — you can visit the St.Clair website and download a copy of our Winter 2018 HouseCall here.