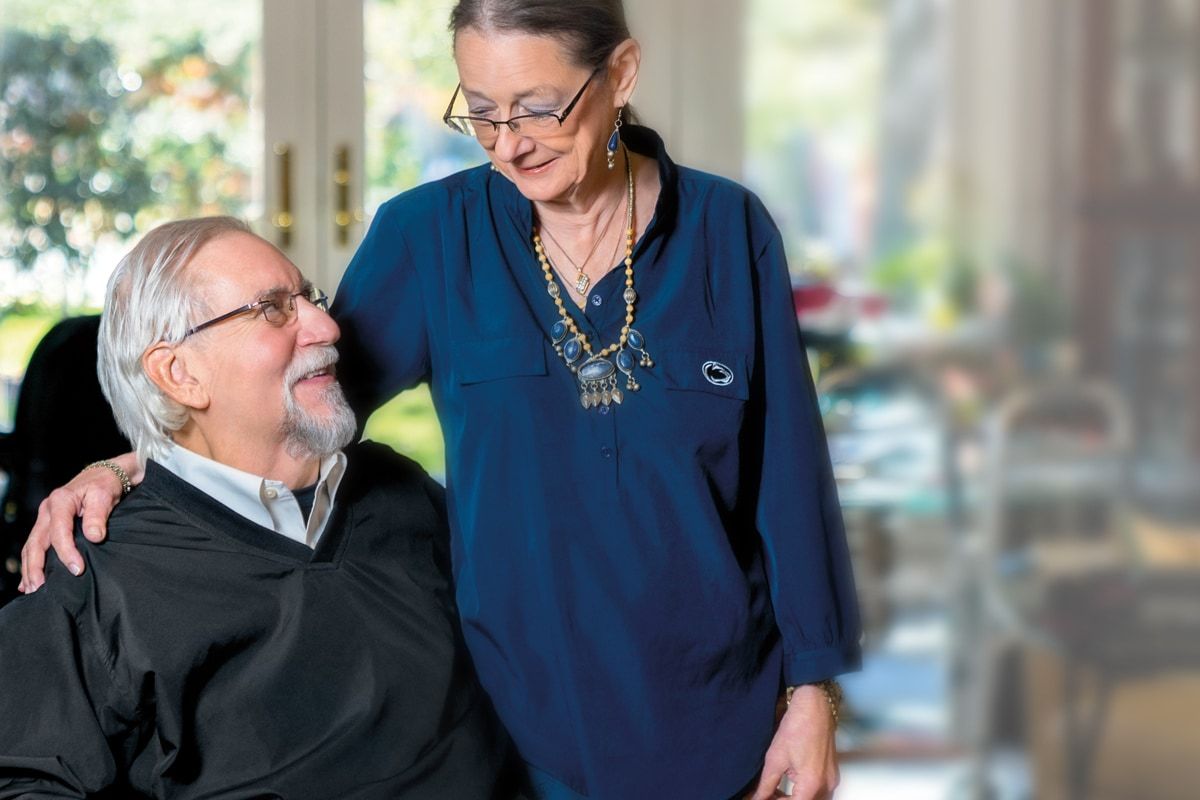 Henry Barr, 77, was struggling through the physical therapy sessions that were part of his rehabilitation following a series of complicated leg surgeries. He was not progressing as expected and found himself becoming breathless as he performed the prescribed exercises. “I was short of breath, and I assumed that this was a normal aspect of the intense therapy. I thought it would start to improve as my therapy progressed, but instead it got worse. I thought there might be something wrong with my lungs, so I made an appointment to see a pulmonologist. He found that my lungs were healthy and recommended that I see a cardiologist.”

An echocardiogram ordered by the cardiologist revealed that Barr had mitral regurgitation, a condition in which the heart’s mitral valve fails to close completely, leading to a backflow of blood that causes shortness of breath and forces the heart to work harder to pump the leaking blood. The heart can compensate for a while, but eventually it cannot meet the increased demand; as a result, the heart muscle weakens, fluid builds up in the lungs and symptoms worsen. “I was aware that I had mitral valve prolapse; I had a heart murmur throughout my life,” Barr says. “But it had never caused a problem before. The regurgitation was a new problem, and it was progressing rapidly. My shortness of breath increased to the degree that I needed to have oxygen on a 24-hour basis. I felt very weak with no energy.” That’s unusual for this retired attorney and former prosecutor, who lives in Mt. Lebanon with his wife Paula. They raised their family of four sons — David, Scott, Jonathan and James — in Bethel Park, and now have four grandchildren, with a fifth on the way.

Barr was referred to Christopher Pray, M.D., a board-certified cardiologist and director of cardiac imaging at St. Clair Hospital, who ordered additional diagnostic tests, including a cardiac MRI. Dr. Pray informed Barr that St. Clair was performing advanced, minimally invasive heart procedures that, in some situations, obviated the need for open-chest heart surgery. He suggested that Barr see Andy C. Kiser, M.D., chief of cardiac surgery at St. Clair. “I knew about Dr. Kiser from reading HouseCall magazine,” Barr says. “I was eager to see him. Dr. Kiser explained mitral regurgitation and heart failure to me, and I was excited to learn that St. Clair was offering a new option, the MitraClip, for the treatment of mitral regurgitation. I learned that I would be the first patient to undergo the procedure at St. Clair, but that didn’t bother me, because Dr. Kiser had done it before.”

When Dr. Kiser became the chief of cardiac surgery at St. Clair Hospital two years ago, one of his goals was to establish a comprehensive program for advancing the diagnosis and treatment of heart valve disease, a field in which he has exceptional expertise: Dr. Kiser played a role in developing the technology for the minimally invasive repair and replacement of failing heart valves, including transcatheter aortic valve replacement, or TAVR. In 2020, he opened a Heart Valve Clinic at St. Clair in order to offer advanced therapies, including the MitraClip, for complex valve disease and heart failure.

“A leaking heart valve can greatly impact quality of life and activities of daily living,” Dr. Kiser explains. “It can lead to heart failure and death. But people with structural heart disease often cannot go to the operating room to have their heart problems repaired, because they are too frail and may have severe heart failure. With the MitraClip, we can close the valve so that normal blood flow is restored. Mr. Barr was clearly a good candidate for the MitraClip. He had been admitted with a severe episode of heart failure and was referred to me because of the mitral regurgitation problem.”

The procedure took place in St. Clair’s Cardiac Catheterization Lab, with the Hospital’s team of cardiac specialists working together: George Cater, M.D., cardiac imaging specialist; Jeffrey C. Liu, M.D., electrophysiologist; Ryan W. Zuzek, M.D., cardiac interventionist; and Dr. Kiser. When Barr woke up two hours later in the recovery unit, he knew immediately that the procedure had been successful. “I felt better right away. I could breathe, without any shortness of breath. It felt miraculous.”

Says Dr. Kiser: “We were able to fix his mitral valve with the MitraClip and stop the leaking so the blood could flow through his heart in the right direction again, and keep him out of heart failure. Post-op, his heart began pumping much more effectively, so that his lungs cleared of the excess fluid right away.”

Barr spent two nights recovering at the Hospital, followed by a one-week stay at a skilled nursing facility. Although he was on oxygen post-operatively, he has been breathing regular room air for months now, and his breathing is effortless. He is looking forward to resuming his rehabilitation, in two phases: physical therapy first, to strengthen his leg, and then cardiac rehab at St. Clair.

“The MitraClip procedure changed my life,” he says. “I’m grateful to my wife Paula, who took care of everything for me, and to my boys, who all came home when I had the procedure. I had tremendous support. I advise anyone who has mitral regurgitation and is eligible for this procedure to go for it. It’s safe, there’s no discomfort and it works. At the end of my last visit with Dr. Kiser, he said to me, ‘See you in about a year.’ I feel fortunate and grateful to Dr. Kiser and the entire team.” 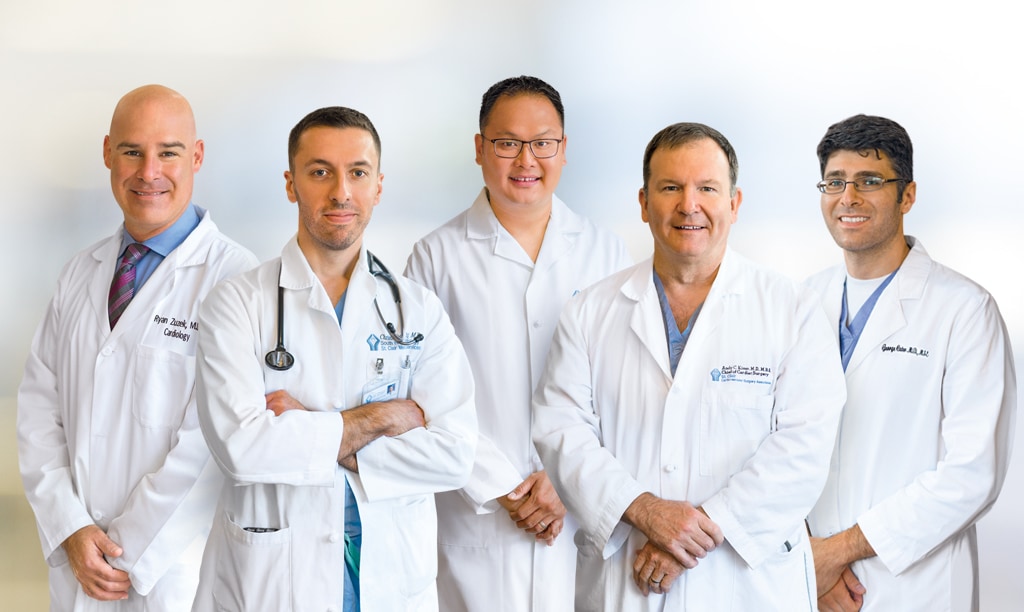 From diagnosis to treatment, to rehabilitation and wellness, our multidisciplinary team of caregivers at St. Clair offers a full range of cardiac care services. Our expert cardiologists and cardiac surgeons provide scheduled and emergency cardiac care delivered with a personalized, patient-centric approach, They have achieved industry-leading treatment times for heart attack victims in the Emergency Department and have also been named a Blue Distinction Center for Cardiac Care for their best practices and high standards of care.