Take, for example, the story of Maria McCormick, who was affected by uterine fibroids. Maria McCormick, 46, leads a busy and fulfilling life centered on her husband, John, and their three children. Maria lives in Baldwin and works full time in billing at a medical practice. When she began experiencing heavy periods, she suspected premature menopause was the source of the bleeding. 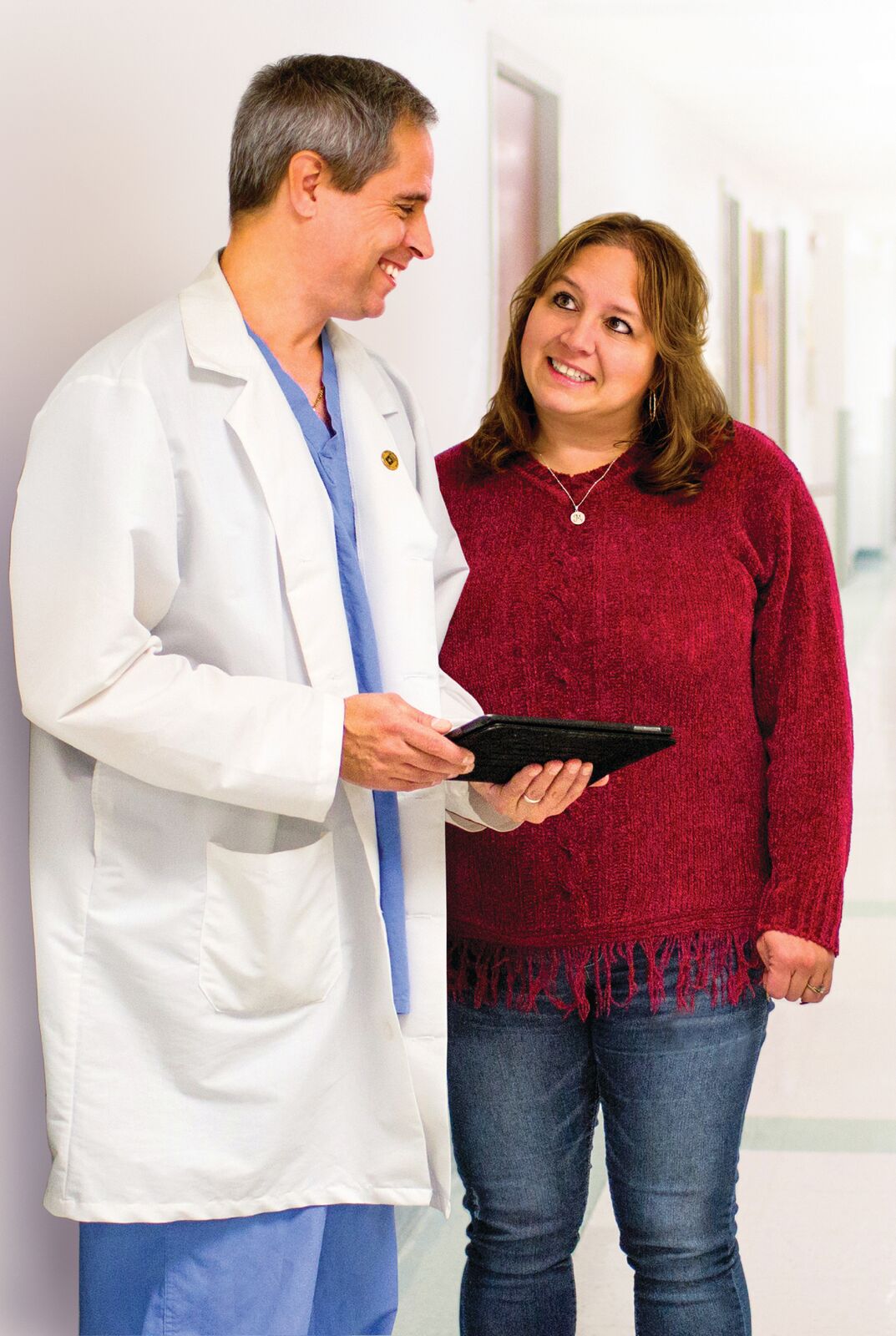 “I did not have any other symptoms, no pain or cramping,” she recalls. “I wasn’t thinking that it could be fibroids. But my gynecologist diagnosed fibroids; the bleeding from the fibroids was so excessive that I became anemic and he sent me to hospital for blood transfusions.”

In September 2015, Maria sustained an injury that resulted in a blood clot in her arm. She was admitted to St. Clair Hospital, under the care of vascular surgeons Samuel T. Simone, M.D., and Thomas A. Simone, M.D., who performed a thrombectomy, a surgical procedure to remove the clot. Post-operatively, Maria received heparin, a blood thinner, to prevent more clots from forming, and she was followed by St. Clair hematologists Robert A. VanderWeele, M.D. and Vincent E. Reyes, Jr., M.D.

All was going well, and she was recovering nicely — until she got her period.  “I already had a problem with heavy periods, but due to the heparin therapy, the bleeding was extreme,” according to Maria. “It became an emergency, and I was very scared,” Maria recalls.

Something had to be done immediately – and Dr. Foster recommended uterine artery embolization. “Dr. Foster explained

uterine artery embolization to my husband and me,” Maria says. “He described it as an alternative to hysterectomy, which I preferred not to have. The embolization procedure sounded interesting and safe, and Dr. Foster explained it thoroughly and reassured me. I liked and trusted Dr. Foster so we agreed to it. I had it done right away and it went very well. A year later, I’ve had no recurrence of bleeding; Dr. Foster totally took care of it. I’m very pleased with the results.”

Uterine artery embolization is becoming an increasingly popular option as women learn more about it. The procedure got a boost, Dr. Foster says, when Oprah Winfrey devoted a program to it. “I get a lot of self-referrals from patients who have done their own research, and we have a good relationship with local gynecologists, who also refer patients. Women like the fact that uterine artery embolization removes the fibroids but preserves the uterus and preserves their fertility. The success rate is high.”

A very rare risk, notes Dr. Foster, is premature menopause. When we embolize, there is the potential for connection between the uterine artery and ovarian artery, which can be accidentally embolized. But to prevent this, we leavethe main uterine artery open and we only occlude the vessels which feed the fibroid.”

Maria has no regrets. “I’m so grateful that this option was given to me, and that Dr. Foster was the one who did it. My care was done like clockwork; everything happened exactly as they said it would. I had a true team taking care of me: the gynecologists, the vascular surgeons, the hematologists and the internal medicine doctors. I have to mention my nurse, Haley Dyczewski, R.N., who got me through it all. I want to thank everyone involved; they were all competent and compassionate; they worked together to solve the problem and help me.”

This story is an edited version of a full report recently published in our Winter 2017 edition of HouseCall. If you want to read the full write-up – which includes more information about uterine fibroids – you can visit the St.Clair website anddownload a copy of our Winter 2017 HouseCall