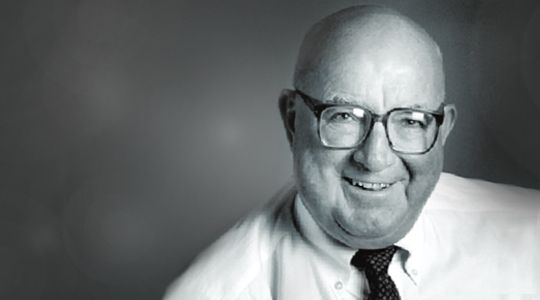 Charles J. Queenan, Jr. (aka Chuck Queenan) was born in the river town of Coraopolis, along the Ohio, just a few miles from Pittsburgh’s iconic Point. Growing up along the river undoubtedly shaped his childhood, and he has remained devoted to his hometown. That devotion has been all-embracing and extraordinarily fruitful for Pittsburgh, as Chuck has played a primary role in shaping much of the region’s growth and revitalization. Through countless professional, philanthropic and civic endeavors, he has touched and shaped Pittsburgh with an impact that few can match. Just as Pittsburgh’s three rivers have shaped the contours of the region’s environment, economy and culture, Chuck Queenan has influenced nearly every major institution and organization in the region — including St. Clair Hospital.

Supporting St. Clair, says Chuck, is a matter of “enlightened self-interest” and community spirit. “We reside at Providence Point, Scott Township,” he explains, “and my wife JoAnn and I have both received excellent care in St. Clair’s Emergency Room. St. Clair is a first class hospital, close to our home, and our primary care physician is St. Clair’s Dr. Alan Yeasted. Ours is a community known for its beautiful homes and neighborhoods, with excellent schools, athletic facilities and churches, great shopping and thriving local businesses. In short, St. Clair Hospital enhances the community and raises home values; it is a jewel of the community.”

Chuck extols the Hospital’s leadership — and he is an expert on leadership. “I admire smart people who are doing the right thing for the right reasons, like (President and CEO) Jim Collins and Dr. Yeasted at St. Clair,” he says. “They have focused on excellence in health care services. St. Clair has a remarkable story. The Hospital provides outstanding clinical services, and it is a leader in hospital safety. St. Clair adopted a strategy to eliminate medical errors and hospital-acquired infections, and it has been successful. Some hospitals pay lip service to these goals, but at St. Clair there is a culture of meaningful compliance that has been developed under their leadership.”

A legend among lawyers, Chuck is known for his exemplary leadership, mentoring and brilliant legal mind. In 2014, he was honored by The American Lawyer journal with the Lifetime Achievement Award. He served as Chairman of the global law firm K&L Gates LLP for decades, guiding the firm through expansions that have made it one of the largest and most respected law firms in the world. He was named Chairman Emeritus of the firm in 2013. K&L Gates represents multinational corporations, growth companies, academic institutions and philanthropic organizations.

In addition to his leadership in law, Chuck has served numerous organizations through directorships. He has served as Chairman of the Board of Directors for the Allegheny Conference on Community Development and Chairman of the Board for Carnegie Mellon University. He has served as a Director for The Pittsburgh Cultural Trust; United Way of Allegheny County; St. Vincent College, Laurel Highlands Council, Boy Scouts of America; Extra Mile Education Foundation and many additional organizations. He has been the recipient of numerous honors, including three honorary doctorates. His community involvement is greatly rewarding, he says, and he cites his involvement with the development of the Regional Asset District as one of the satisfying experiences. He is also a founder of DINAMO, a non-profit, multi-state organization designed to secure financing for the lock and dam infrastructure of the upper Ohio inland waterway system and its tributaries.

Now retired, Chuck enjoys playing golf, especially with his grandsons. “I am married to my childhood sweetheart and blessed with a wonderful family,” he says. He continues to work with non-profits and encourages others to volunteer their time and talents to hospitals, arts organizations and other non-profits. “My first organization was the Mt. Lebanon Civic League; my volunteer activity grew from there. What I bring to cultural and civic organizations is institutional memory — ‘the wisdom of the ages’ — and knowledge of leadership and how to engineer change in public policy. If you can convince people that they’re supporting a winner, like St. Clair Hospital, you can get them on board.”

Chuck is committed to serving others and improving communities by being a force for good, and he believes that everyone can contribute in some way. “We are only on this spinning ball we call Earth for 70 or 80 years,” he says, “and during that period we have an opportunity to leave this spinning ball better than we found it. I believe that part of being alive is seeking what you can do to make life better for others. Find out what appeals to you and get involved. The rewards are tremendous.”