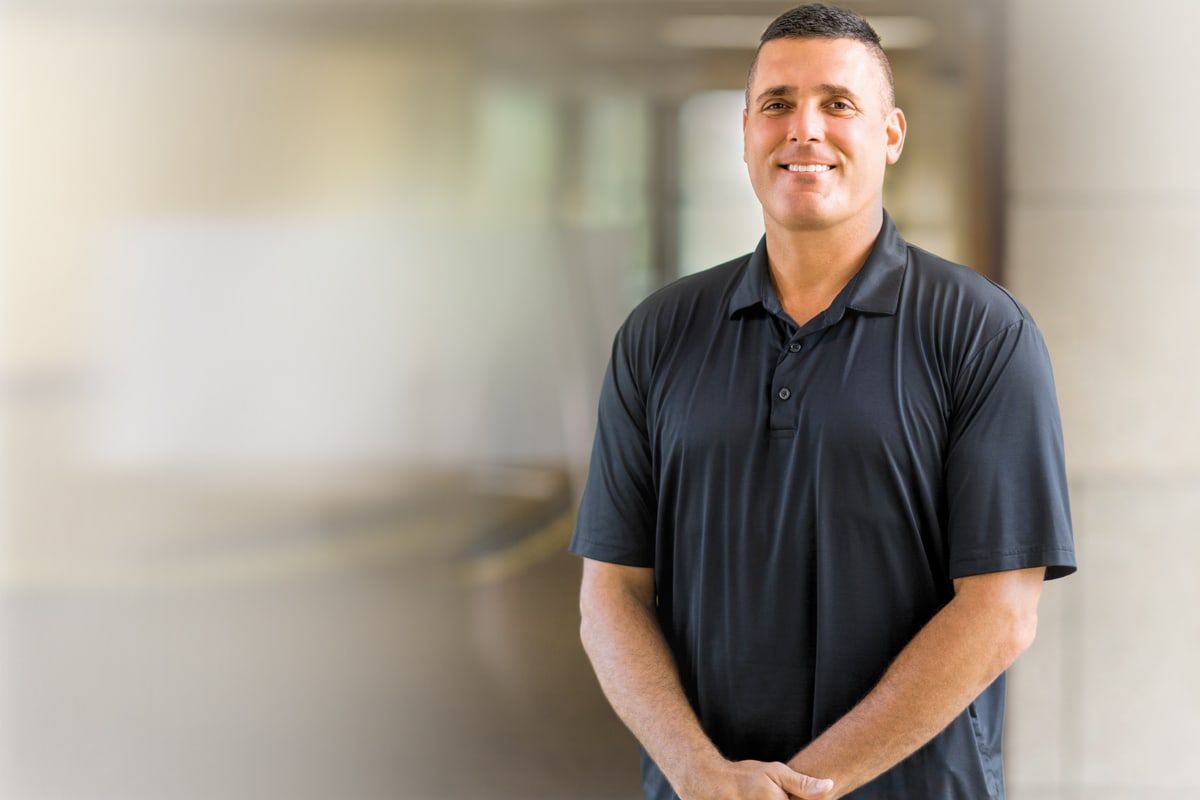 Christopher Babirad: Back on patrol

Christopher Babirad, 49, is a strong and athletic man who has served as a Pennsylvania State Trooper for 21 years. A former college football star at Washington and Jefferson College and a father of three (Ryan, 26; Alex 23; and Noah, 18), Babirad lives in McDonald. He is attentive to his health and fitness, so it was a bit out of character for him when he delayed telling his primary care physician, Kamlesh B. Gosai, M.D., that he was passing blood with bowel movements. “At first it was just occasionally, but it became more consistent,” he recalls. “I was worried: I knew it might mean cancer, but I kept looking for other explanations. I did a lot of Internet research – maybe it’s this condition or that one. It was nearly a year before I finally told Dr. Gosai. His physician assistant ordered a colonoscopy and when I woke up in recovery they told me I had a mass the size of a lemon right at the bottom of my colon. The gastroenterologist, Nicholas A. Bellicini, D.O., said it’s most likely cancer and then the pathology confirmed that. This happened last year on Christmas Eve.”

Babirad was referred to Scott A. Holekamp, M.D., and also to Robert A. VanderWeele, M.D., an oncologist and hematologist, for medical treatment of the cancer. “I was scheduled to have the surgery but I had a repeat colonoscopy the day before and based on that, the doctors decided to hold off on the surgery and give me medical treatment first,” he says. “I started six weeks of chemotherapy and radiation. I took chemo pills twice a day but it was the radiation that beat me up the most: 28 treatments, Monday through Friday. I had side effects and couldn’t work. I had to wait eight weeks for the radiation to clear before finally having the surgery.”

In May, Babirad underwent a rectal resection, performed by Dr. Holekamp. Their original plan was for Babirad to have robotic-assisted surgery, but that plan was altered. Dr. Holekamp explains: “We didn’t need the robotic system. The chemo and radiation were done upfront and were so effective that his tumor was almost entirely gone at the time of surgery, and what was there was accessible with laparoscopy. Chris is one of the 25 percent of people who have such a great response to medical treatment. The lymph nodes were all negative for cancer, so we got the tumor out completely. It was the best possible outcome.”

Dr. Holekamp performed a specialized procedure known as a total mesorectal excision, or TME. The mesorectum is a thin membrane that consists of the tissues that surround the rectum, including the lymph nodes. Using meticulous surgical technique to remove the mesorectum without tearing or perforating it, Dr. Holekamp resected the rectum plus a margin of healthy tissue. “TME is a surgery that you might not expect to find at a hospital outside the city,” Dr. Holekamp says. “Dr. Nadler and I would not perform this surgery if we could not get excellent outcomes, because the quality of the dissection determines how often the cancer recurs. The quality of this surgery was perfect, and as a result we can maximize Chris Babirad’s longevity without the cancer recurring and with minimal side effects.”

It was a long ordeal for Babirad, and it coincided with the beginning of the COVID-19 pandemic, but he says that his doctors made the whole process easier. “My doctors, including Felicia E. Snead, M.D., my radiation oncologist, were great and St. Clair gave me excellent care. I felt safe and comfortable there and I was always treated well. The radiation oncology department at St. Clair Hospital Cancer Center is great.”

Babirad feels healthy now and has gone back to work full time. He says the cancer journey makes you face your mortality and he offers the wisdom he gained through his experience: “At the first sign of a problem, see your doctor. Don’t delay. I tried to tell myself it was something else, but it was cancer. What helped me through it was the positive attitudes of my doctors, Holekamp, VanderWeele and Snead, who were informative and supportive. My girlfriend, Elaine McMullen, is an emergency room tech so she was very helpful, too. I felt lucky that I had been referred to the very best physicians and received care at the very best hospital, St. Clair.”

Dr. Holekamp specializes in colon and rectal surgery. He earned his medical degree at University of Cincinnati College of Medicine, and completed a residency in general surgery at Beth Israel Medical Center in New York City. He then completed a fellowship in colon and rectal surgery at the University of Miami/Jackson Memorial Hospital. He is board-certified by the American Board of Colon and Rectal Surgery and the American Board of Surgery. Dr. Holekamp practices with St. Clair Medical Services.