1 in 3 Americans don’t get enough sleep to keep themselves well rested and healthy. The reasons for this lack of sleep vary. Sometimes a busy lifestyle is to blame – other times, however, a medical condition is at the root of the problem. 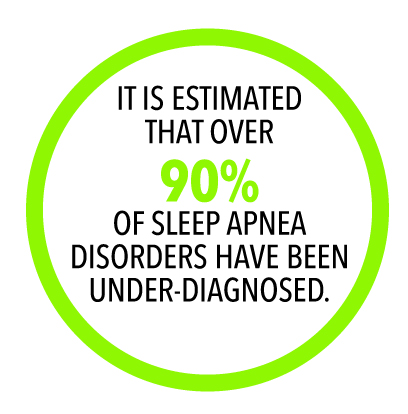 One such medical issue that causes poor sleep is Obstructive Sleep Apnea  (OSA). Estimates by the National Heart, Lung, and Blood Institute of the National Institutes of Health indicate that OSA affects at least 18 million Americans – but is underdiagnosed and undertreated. OSA is a devious condition. It does its harm while we are asleep and unaware. Its symptoms can be subtle, completely absent or ambiguous, suggesting other medical conditions. And ultimately, OSA impacts everyone, as it costs society billions in lost worker productivity, inefficiency and accidents.

But the good news is that physicians are more aware of the pervasiveness of the condition and are screening for it with increasing regularity. In addition, the public is learning more about the potential implications of OSA, and more and more people are talking about it with their PCPs. As there is no blood test or definitive physical sign of OSA, the physician relies largely on a good history from the patient in deciding to order a sleep test, and then prescribe the best treatment for their patient’s sleep disorder.

At St. Clair, we operate a state-of-the-art Sleep Disorders Center that helps to provide Pittsburgh residents with both a diagnosis and treatment of their sleep issues, including OSA. Once patients come through our doors, we are able to specifically determine the cause or causes behind their lack of rest.

But as we mentioned, OSA is a subtle illness. This raises the question: how do patients find out that they need professional help? So often, we brush off our exhaustion and signs of poor sleep as a normal aspect of life in the 21st century. Fortunately, there are a number of ways that patients can determine whether or not to seek out a solution to their poor night’s rest – as highlighted by these patients’ stories.

For one St. Clair patient, the recognition that something was wrong came from a close  source: their partner. Ken Mittereder, 50, was urged by his wife, Diane, to look into his sleeping troubles. “Diane woke me up [one night] to tell me that I had stopped breathing,” he recalls. “She was used to hearing me snore, and when the snoring stopped, she woke up. I didn’t know I had symptoms of sleep apnea. I was active, I exercised and coached soccer; I felt fine. But I saw my primary care physician and, after I was tested and began treatment, I realized that, in fact, I had been experiencing symptoms; I just didn’t know it. I thought I felt good, but with BiPAP I felt so much better.”

Ken, a Mt. Lebanon resident, recalls that he had no trouble settling into the Sleep Disorders Center  at St. Clair Hospital. Ken is an engineer whose job involves business travel; and “St. Clair’s Sleep Disorders Center has rooms that are like the hotel rooms that I’m used to; it’s comfortable. I fell asleep easily there. After three hours the tech woke me to tell me I had had many episodes of apnea. He put me on BiPAP and adjusted it, and I slept well with that. I still use that same mask.”

Ken has now been using BiPAP for five years, without a problem. This is all the more impressive because using BiPAP can require an adjustment period for many patients. “It may take time to get used to wearing the appliance,” according to Karen S. Gannon, BSRT, RPSGT, Manager, Respiratory Care/Sleep Disorders Center at St. Clair Hospital. “Some people have trouble with the idea of something on their face while they sleep. You have to give it a chance; patients tell me that they feel so much better once they start using it that the initial discomfort goes away. In my experience, about 90 percent of intolerance has to do with the interface. If patients are finding it difficult to adjust to wearing the mask, they simply contact the Sleep Disorders Center or their equipment vendor to see if a mask in another style or size will work better.”

Ken’s recommendation to fellow patients? “If you’re not using your device because of discomfort, find out how to make it fit better. Fix the problem. You should do this for yourself — you’ll feel better, sleep better, and live longer. Or do it for your family, so that you will be around longer for them. I believe that using BiPAP has added years to my life.”

Another patient, June Vanucci of Green Tree, was referred to our Sleep Disorders Center by her cardiologist (Mark J. Greathouse, M.D. of St. Clair Medical Services South Hills Cardiology in Bethel Park). And the recommendation came as a complete surprise. “I had no symptoms,” she remembers. “I was a light sleeper, but I thought it was normal for me. I didn’t realize that my sleep was of poor quality, but when I look back, I remember that I often felt like I wanted to stay in bed in the morning. I took a lot of naps.”

June, 85, a retired secretary for Alcoa, is an active wife, mother and grandmother who attributed her need for naps to simply getting older. But when she saw Dr. Greathouse, he did an echocardiogram and told her there were some signs that suggested sleep apnea. While she didn’t think the test was necessary, she eventually went to St. Clair’s Sleep Disorders Center to take the test.

“Everyone in the Sleep Disorders Center was nice and very skilled. They put a number of sensors on my face and head. The study showed that I have sleep apnea, so they put me on BiPAP. I go to bed at midnight and I sleep through the night now! I sleep soundly and I no longer need to take naps. When I get up, I stay up.”

June says it took her about a month to get used to using BiPAP – but it has definitely helped her. “Now, I would be afraid not to use it. I think there are lots of people like me, who have sleep apnea but don’t know it. I’m grateful that Dr. Greathouse ordered a sleep study for me; I have more energy and I feel rested when I wake up.”

Like Ken – and like most people suffering from obstructive sleep apnea – Bob was first alerted to the problem by his spouse. For years, Bob heard complaints about his explosive snoring, and was warned that he appeared to be struggling for breath in his sleep.

Then, a little over 20 years ago, Bob underwent an overnight sleep apnea test. However, that test proved to be inconclusive; and an exam by an ear, nose and throat physician suggested having his adenoids and tonsils removed might curb the problem. But, the surgeries came with a tough recovery time – so Bob passed on them, and went on snoring, and gasping for breath.

It was relatively recently, in early 2016  that Bob was encouraged to get his problem looked into once more. Bob is currently the managing editor of St. Clair’s HouseCall magazine – and, as he recalls, “I could not keep walking past St. Clair’s Sleep Disorders Center on my way to the Marketing and Development Department without stopping in for some professional advice.”

Bob was told by St. Clair’s sleep experts that his self-described symptoms were classic signs of obstructive sleep apnea. He was quickly advised to meet with his primary care physician and see if a physician’s referral for a sleep test was in order. It was. And so, Bob underwent a take-home sleep test, and he returned the test kit the next day to the Sleep Disorders Center. “The results showed that I was suffering from obstructive sleep apnea and that an overnight stay in the center was needed for me to be fitted for a CPAP and to undergo my first ‘treatment’,” he recalls.

Bob underwent an overnight test that collected more data on his condition, and he was then fitted for a CPAP machine to use at home. “The folks from the medical device supplier  showed me how to use and clean my CPAP and gave me the telephone number of a ‘sleep coach’ whom I could call to discuss any issues I might be having with using the machine,” Bob says. “My sleep coach has actually called me a couple times to make sure I am comfortable with using the device.”

Like many patients, “strapping a mask over your face and having air continually pushed through your nose and down your throat for five to six hours a night took a little getting used to,” Bob admits. “But the benefits certainly outweigh any inconvenience. I now wake up refreshed and, for the first time in decades, feel like I have had a solid, uninterrupted night’s sleep. And that sleepiness that creeps in every day between 2 and 3 p.m. is, for the most part, a distant memory.”

And that brings Bob to the message he wants to share with his story: “So, for those of you who might still be on the fence about whether to pursue testing for possible obstructive sleep apnea, my advice is to not put it off any longer. If it turns out you have obstructive sleep apnea, you will greatly appreciate the benefits of using a CPAP or BiPAP, as will your long-suffering bed partner.”

St. Clair’s Sleep Disorders Center is just one of the services we offer to patients suffering from a reduced quality of life due to poor health. If you feel after reading these stories that you need to discuss your sleep health with our team, you can call St. Clair Hospital’s Sleep Disorders Center at 412.942.2035 or contact one of our primary care doctors for a referral.

Finally, to read more about St. Clair’s patients and various healthcare services, we recommend browsing through our HouseCall archives. This story was originally printed in a recent issue, and is just one look into the work we do a daily basis.